Baroque and Beyond
Please note: Account credits cannot be redeemed online. Please call our Box Office on 1800 444 444 or email [email protected] if you wish to use your credit towards tickets to this concert.

We are celebrating our return to the stage with a spectacular program inspired by the music of Vivaldi’s Four Seasons.

Baroque and Beyond sees Richard Tognetti lead the ACO through four masterworks of the Baroque era, including Summer from Vivaldi’s The Four Seasons, JS Bach’s Brandenburg Concerto No.3 and a grand Concerto Grosso by Handel, before tracing the influence of the Baroque throughout the centuries.

The virtuosity and brilliance of the ACO will be on full display in music ranging from Edvard Grieg’s Holberg Suite to the minimalism of Steve Reich and ballet music by Igor Stravinsky. These concerts also premiere the first public performances of a stunning new orchestral arrangement of Bach’s iconic Chaconne by Richard himself.

After so many months away from the concert hall, we can’t wait to be back and perform for you in November. 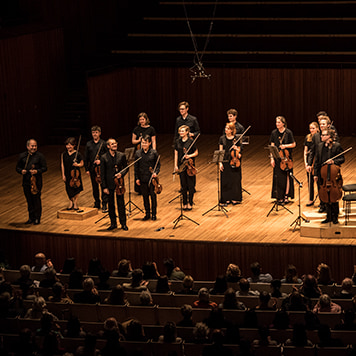 Get the answer to frequently asked questions below, or email [email protected] if something still isn't clear.

Will I need to be vaccinated?

In adherence with the NSW Government Health Order, we will require all ticketholders to be fully vaccinated to enter the venue. If you are not yet fully vaccinated, you will be able to claim a credit or refund on your ticket by contacting our friendly Box Office staff at [email protected]

Do I have to wear a mask to concerts?

Face masks are mandatory in NSW in line with current government health advice concerning COVID-19. Please check this page regularly for updates and take care to read all pre-concert emails and communications from the ACO concerning your performance.

Am I eligible for a concession?

You can use your existing credit towards any ACO purchase, including live performances and StudioCasts subscriptions. Credits can only be redeemed by emailing [email protected] or by calling our Box Office on 1800 444 444.

If you would like to book wheelchair or accessible seating spaces, please call the Box Office on 1800 444 444.