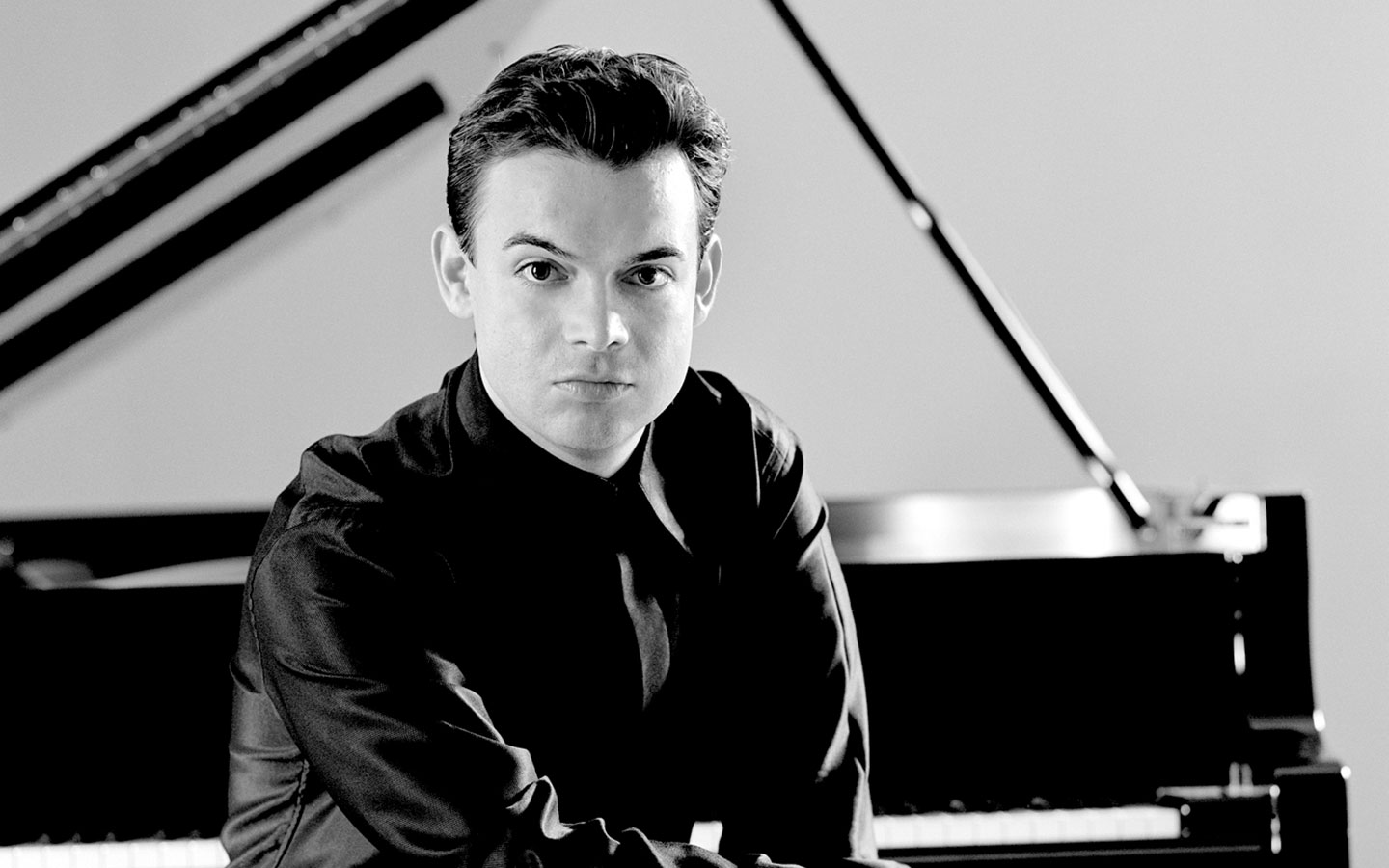 Mozart is the Universe

Dejan Lazić discusses Mozart's resounding influence on his musical career.
Dejan Lazić talks to Max Opray about how the music of his idol, Mozart, reverberates across space and time.

With every change of topic, Dejan Lazić’s chestnut-hued eyes somehow widen further. They open with excitement, expanding out from under his arched brows.
We are seated at a cafe encased within the modern glass-and-steel extension of the Royal Concertgebouw of Amsterdam, the adopted home of the Croatian-born pianist and composer. In a blue short-sleeved shirt, his hair neatly brushed back, Lazić gesticulates like a conductor. He begins his story at the age seven, on his first visit to the cinema in Zagreb, where he fell in love with Amadeus, the fictionalized 1984 biography of Mozart’s life. He kept coming back. “Half their profit was me,” he laughs. “I don't know how many times I asked my parents to buy me tickets, they would say: ‘Again?’ Later I had the VHS and now I have several versions on DVD, including the director's cut.”

Lazić would eavesdrop jealously on the lessons given to other pupils by his piano instructor mother, who went on to become his very first teacher – for a short period. “After, I don't know, a dozen lessons, she thought it'd be better if I go to her colleague,” he says. “I asked too many questions: ‘Why do I need to use my fourth finger on F sharp? Why?’ She decided: ‘Okay, this kid is difficult. Go to my colleague instead.’ She thought it'd be healthier for, you know, our mother-son relationship. ‘Off you go.’”

Lazić proved to have talent – so much so that he was invited to study at the Mozarteum in Salzburg, the Alps-girded home city of his idol. The 12-year-old Croatian prodigy moved with his parents to a place as obsessed with Mozart as he was – the composer’s face plastered across every kind of memorabilia, his concertos reverberating out of the windows onto the streets.

Lazić believes that Austrians nurture their musical heritage to remind themselves that they once were the cultural powerbrokers of the 18th century: the Austro–Hungarian empire. Throughout his studies Lazić would perform Mozart, and he suspects the Austrians were more comfortable with him, rather than other foreigners, taking on the works of their favourite son, as Lazić was from Croatia, which in Mozart’s era was part of the empire. It was only a matter of time until Lazić became a naturalized citizen of Austria, before further studies and work took him to Germany and now the Netherlands.

Lazić draws on his Croatian heritage in his compositions, incorporating motifs from the folklore of Istria – but never when he plays his hero. “Mozart is the universe, it is beyond Croatia or Europe, or planet Earth, it doesn't even belong to our galaxy,” he says, pausing to sip from a mug bristling with mint leaves. “That's what Mozart is, why it speaks to so many, it speaks to a child in Colombia and an elderly lady in Australia – it doesn't matter because it's so universal.”

He warms to his theme, talking of studies that indicate listening to Mozart helps the recovery of children in hospitals, aids the elderly in care homes, and even relaxes the muscles of cattle so they produce better milk and meat. “I certainly know for sure my cat, you know, although he hates music and hates piano, when I play Mozart, if it's a slow movement and really beautiful, he would just lie next to the piano, it's incredible, and I cannot explain it,” he says, breaking into a smile. “So in Australia perhaps we will calm the wombats and the emus.”

Lazić says this visit to Australia will be his 11th. He loves the opportunity to connect with the Croatian diaspora, and wonders how things could have been different had his family joined the waves of migration from his homeland to Australia, instead of Austria. He is, true to form, enthusiastic about the openness of Australians to new experiences. “I remember a truck driver stopping in the middle of a highway and screaming out to me – pardon my Australian accent – ‘Amazing Scarlatti!’ I thought: ‘Wow, you were at the concert, amazing.’ People here really say, ‘Hey, I've never been to a classical music concert, I'm going to check it out. Maybe I hate it, maybe I love it.’”

He wishes for this openness to extend to the world of classical music itself. His reverence for Mozart doesn’t mean Lazić shares the reluctance of many of his contemporaries to put his own stamp on the virtuoso’s work, evidenced in his original arrangement of the Allegretto grazioso from the Piano Sonata K 333. “Look,” he says, “what we know for sure is that all the great ones – Mozart, Beethoven, Brahms – they loved arrangements, loved not only arranging their own music but arranging each other’s, and they were fine with that.”

Lazić’s voice drops an octave as he leans forward conspiratorially. “So I must say, nowadays, there is a little taboo about arrangements. Yes. Up to the 1950s, 1960s, it was all right. But now, it's something sacred: music tends to become an institution and untouchable, no longer a living thing. But it should be alive.”

He pauses, glancing sideways at the old brick of the Concertgebouw exterior.

Lazić cites the example of Joseph Haydn, whose symphony No. 39 (Tempesta di mare) informed Mozart’s Symphony No. 25, with both to feature on the Australian tour. “I think Mozart, I don't know if he would find mine a great arrangement, because we know he rarely found any other composer truly great – maybe Haydn,” he says. “But nevertheless, I don't think he would have had anything against other composers arranging his music, because, you know, back then it was in fashion to hear a tune from, for instance, Gluck’s opera, and Mozart or anybody else would write several variations. I mean, I pay a tribute, I pay respect. An arrangement means for me truly that.” Celebrating Mozart will tour to Wollongong, Canberra, Melbourne, Adelaide and Sydney. Full details and tickets via the link below.